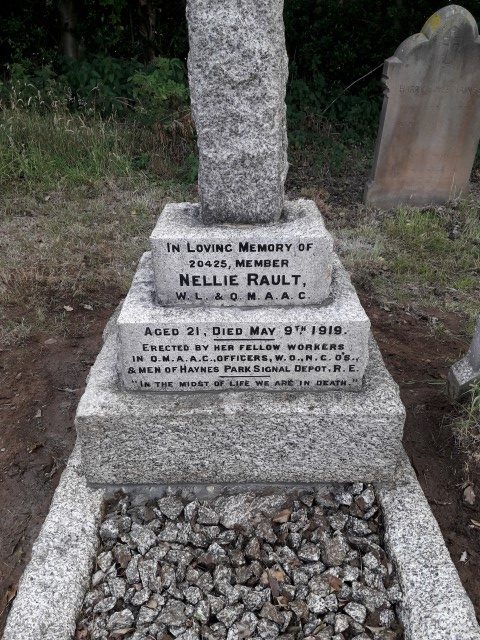 Neville Memorials undertook a project to restore the grave of a young woman, situated in St Mary’s Churchyard in Haynes, Bedfordshire, who had served in 1919 with Queen Mary’s Army Auxiliary Corps (QMAAC) and had fallen into disrepair.

Nellie Rault had been posted to Haynes Park Royal Engineers Signals Service Camp in Bedfordshire in 1917 and worked as a cook in the Officer’s Mess.
However, on the 9th May 1919, she was brutally killed in woods near the camp and her murder has never been solved. She was buried with fully military honours and has rested in the churchyard in Haynes ever since, tended to by local resident Kevin Penfold.
Kevin contacted Neville Memorials to see whether Nellie’s grave, which over the years and despite his efforts to maintain, had fallen into disrepair, could be restored. Given the historic importance of the memorial, the team was only too glad to help.
Work began in July to restore the memorial with the team lifting, dowelling, repainting and refixing the memorial, restoring it and Nellie’s memory to its former condition.
Kevin said: “I wanted give you a huge ‘thank you’ for what you made possible regarding the restoration of Nellie’s memorial. I can’t begin to tell you how happy (and rather emotional) I feel, seeing Nellie’s memorial standing proud once more, and after being in place for 100 years, looking as good as it must’ve done when it was first erected.
“I find it reassuring to know that despite her grave being forgotten and neglected for so many years, almost to the point where her wonderful memorial was lost to us, her grave will be protected and maintained for at least another hundred years.
“Please extend our thanks to all of the people who carried out this work, it’s beautiful. I never thought that I would see this happen in my life time. It has convinced me that miracles really can happen.”