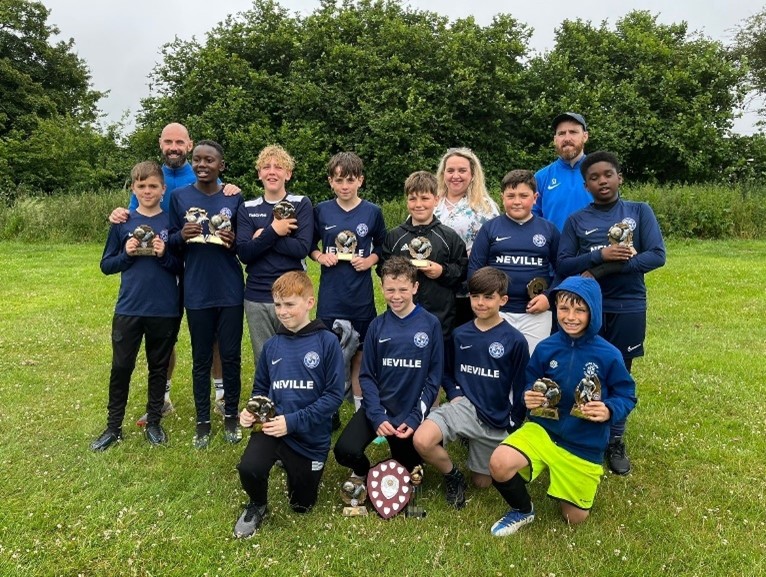 Neville Funerals, one of the region’s longest established family-owned businesses, has celebrated its continued sponsorship of local football team Stopsley United Flyers with an end of season presentation.

Neville Funerals originally started sponsoring the U8’s team in 2017, as a business committed to supporting local community groups. Five years on, the funeral directors are still proud sponsors of the now U13 team.

As part of the sponsorship tradition, a representative from Neville Funerals presented the Neville Shield to one of the players, a trophy which recognises their hard work throughout the season.

This year the presentation took place as a celebration with bouncy castles, food and drink stands and of course, the stage for the trophies.

Overall, excluding the participation trophies that go to all players, six trophies were awarded – the Coach’s Player, Players Player, Supporters’ Player, Most Improved, Team Player and the special Neville Shield that is given to a player that has stood out all season, showing passion and determination through the year.

Aiden, a player on the team, received the trophy this year after the team’s first major injury where he broke his wrist. Though determined to continue his passion, Aiden continued to show up to training to watch and after a few months in recovery was ready to play again.

On the long-standing relationship between Stopsley United Flyers and Neville Funerals, the Coach, Simon Jackson, said: “We often catch up after every game to let them know how the team have performed, they’re really involved and interested in what we do and we’re extremely thankful for that.

“They help with a lot of the costs that go into running the team, providing the kits each season which can cost a fortune now that the boys are growing, as well as helping to pay towards my coaching certificate and that mighty Neville Shield.

“We feel very lucky to have a local business support the team the way they do, it’s always great to see Charmian from Neville’s pitch side to watch the games. It’s clear that they want the best for the team and by being so approachable, I know that we’re going to have the support for next season which will be our first ever 11-a-side season.”

Charmian Alexander, Director at Neville Funerals, said: We love showing our support to the Stopsley United Flyers, they’ve grown so much since we’ve started sponsoring the team and after their first season in Division One, we couldn’t be prouder.

At Neville Funerals, our ethos is about giving back to the community we serve and knowing we’re helping provide for a local team really warms our hearts. They’ve been improving each season and I’ve found great joy in delivering the Neville Shield.

“We plan to continue our unwavering support of the team and watch them as they grow into young adults.”